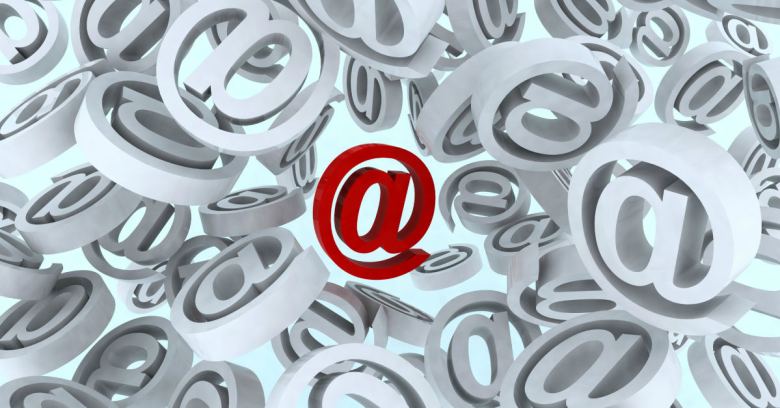 Two weeks ago was Cybersecurity Awareness Month’s “Fight the Phish” week, a theme that the #Cybermonth organisers chose because this age-old cybercrime is still a huge problem.

…it’s easy to forget that the “obviousness” of many scam emails comes from the fact that the crooks never intended those scams for us in the first place.

The crooks simply sent them to everyone as a crude way of sending them to someone.

So most scams might be obvious to most people, but some scams are believable to some people, and, once in a while, “some people” might just include you!

For example, we received a phish this morning that specifically targeted one of the main South African banks.

(We won’t say which bank by name, as a way of reminding you that it could have been any brand that was targeted, but you will recognise the bank’s own website background image if you are a customer yourself.)

There’s no possible reason for any crook to associate Sophos Naked Security with that bank, let alone with an account in South Africa.

So, this was obviously a widely-spammed out global phishing campaign, with the cybercriminals using quantity instead of quality to “target” their victims.

Let’s do some power-of-ten approximations to show what we mean.

Assume the population of South Africa is 100 million – it’s short of that, but we are just doing order-of-magnitude estimations here.

Assume there are 10 billion people in the world, so that South Africans make up about 1% of the people on the planet.

And assume that 10% of South Africans bank with this particular bank and use its website for their online transactions.

In other words, it’s easy to extrapolate that 99.9% of all phishing emails will give themselves away immediately.

Therefore you might wonder to yourself, perhaps with just a touch of smugness, “If 99.9% of them are utterly trivial to detect, how hard can the other 0.1% be?”

On the other hand, the crooks knew all along that 999 people in every 1000 who received this email would know at once that it was bogus and delete it without a second thought…

..and yet it was still worth their while to spam it out.

Are you thinking clearly?

The ultimate believability of phishing scams like this one actually depends on many factors.

These factors include: Do you have an account with the company concerned? Have you done a transaction recently? Are you in the middle of some sort of contract negotiations right now? Did you have a late night? Is your train due in two minutes? Are you thinking clearly today?

After all, the crooks aren’t aiming to fool all of us all the time, just a few of us some of the time.

This scam starts, like many phishing scams, with an email: 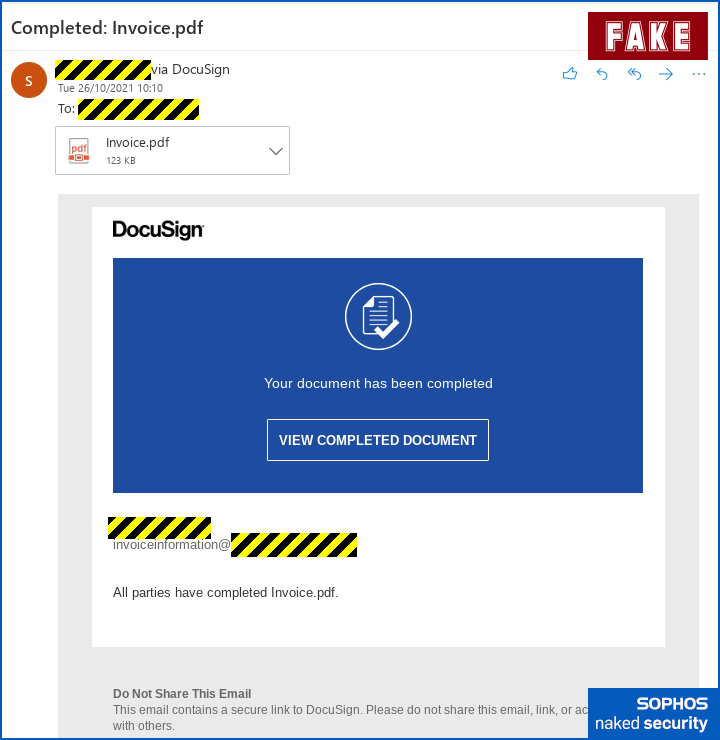 The email itself comes from cloud-based document and contract-signing service Docusign, and includes a link to a genuine Docusign page. (We have labelled the Docusign screenshot below as FAKE because the content is made up, in the same way we label emails FAKE even if they appear in your trusted email app.)

The Docusign page itself isn’t dangerous because it doesn’t contain any clickable links, and just seeing the curious text in it should make you realise that this is just what it seems, a document about nothing: 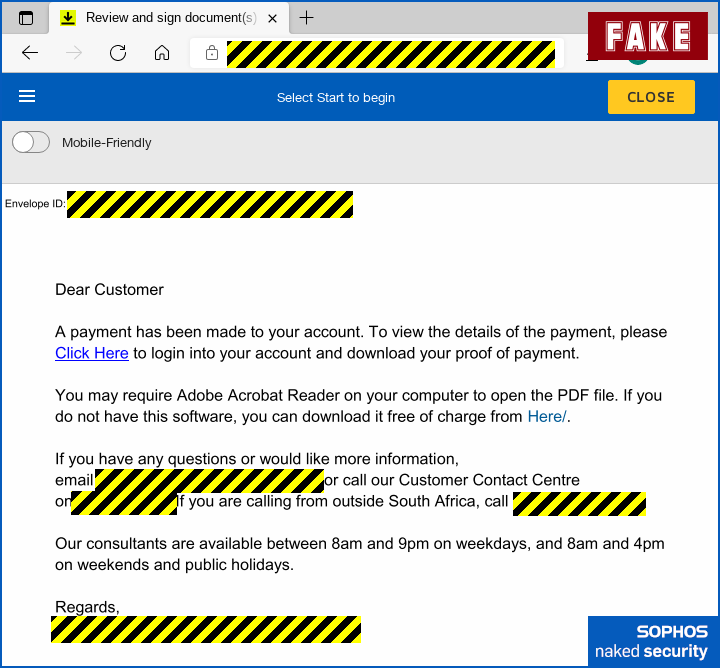 It’s not a contract, so there’s nothing to identify the person at the other end, or to reveal what the document is about, so the Docusign link is actually a red herring, though it does add a sense of legitimacy-mixed-with-curiosity into the scam.

“Is this some kind of imposter?”, you are probably wondering, “And what on earth are they talking about given that Docusign only has a page for me to view, not an actual contract to process?”

So you might be inclined to open the attached PDF, which is indeed just a replica of the document in the Docusign window: 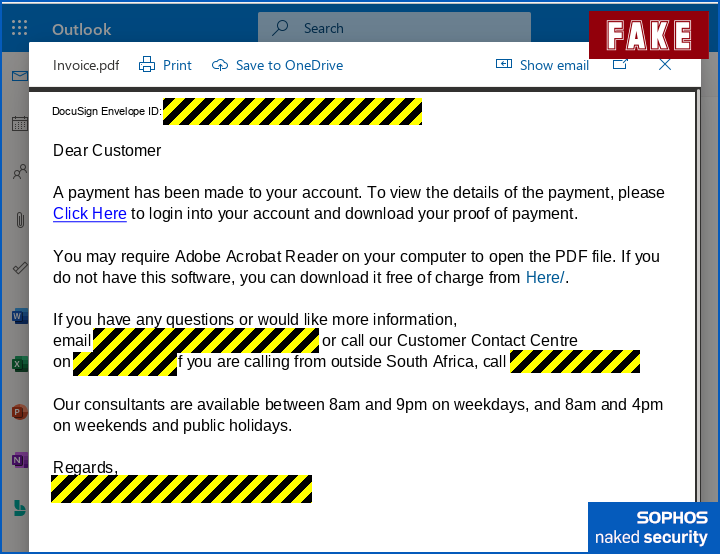 Except that the link in the PDF version of the document is live, and if you’re still wondering what’s going on, you might be inclined to click it, given that the PDF probably opened in your chosen PDF viewer (e.g. Preview, Adobe Reader or your browser)…

…so it doesn’t feel like the know-bad option of “clicking links in emails” any more.

But one thing’s for sure, the visuals are surprisingly close to the bank’s regular login page: 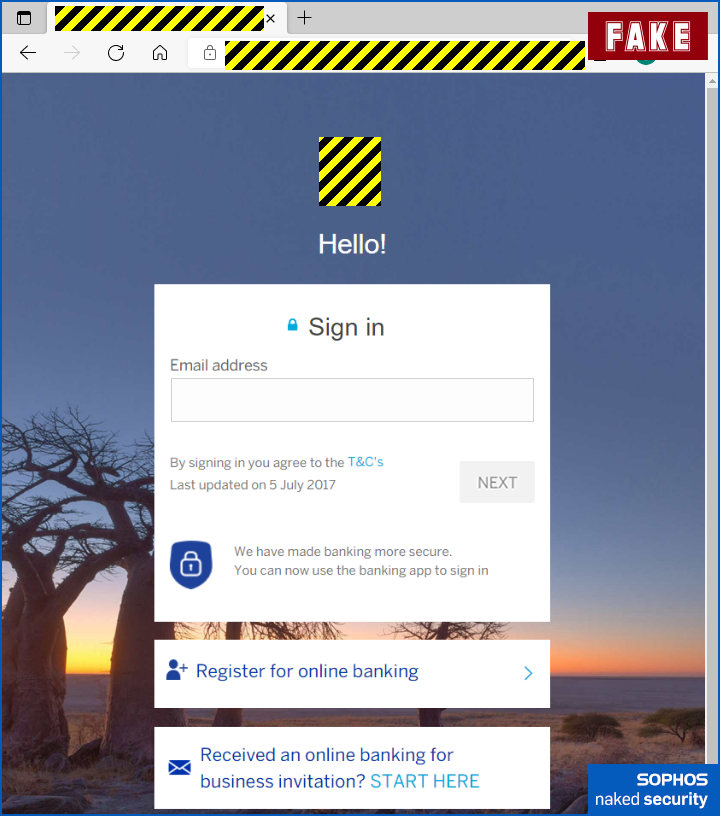 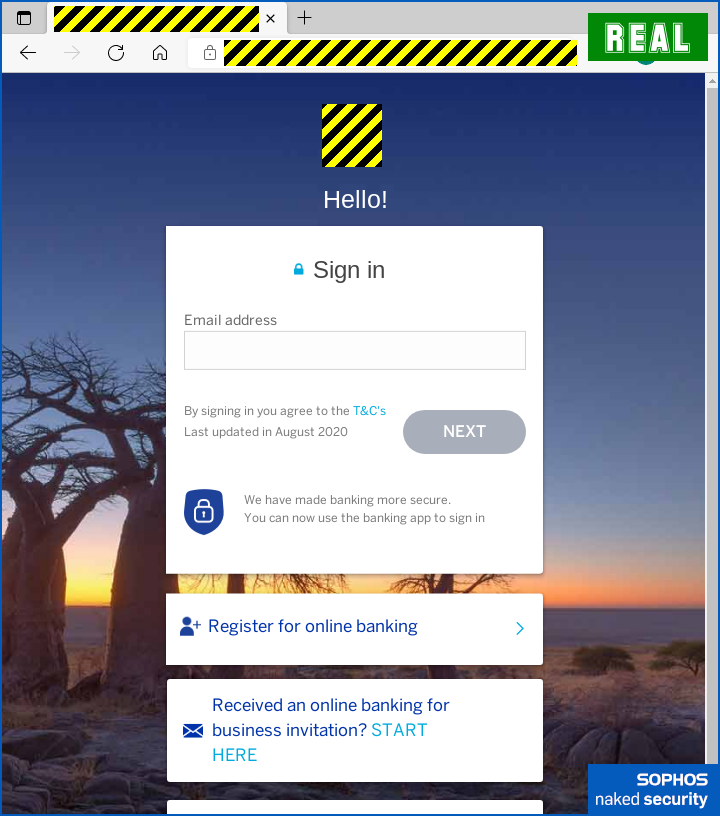 Perhaps the bank is trying to draw your attention to a transaction that hasn’t gone through yet, given that you’ve not actually “signed” anything yet via Docusign?

Of course, if you do try to login, the crooks will lead you on a merry but visually agreeable online dance, asking for your password: 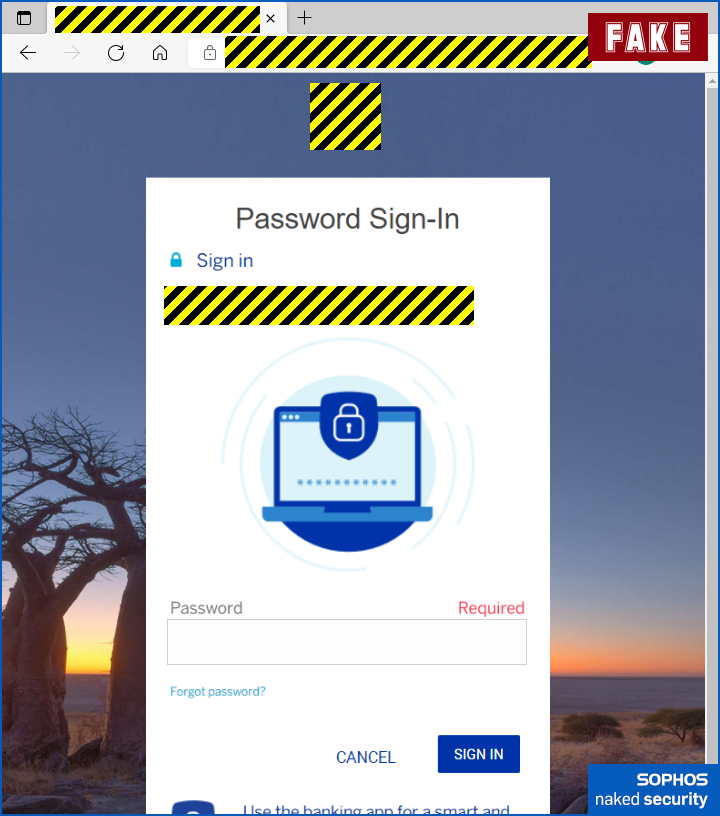 The next step asks for your phone number, so the crooks get that even if the final step fails, followed by a short animated delay, presumably while one of the crooks (if they’re online, or an automated system if they aren’t) starts trying to login using your credentials, followed by a fradulent request for your 2FA code: 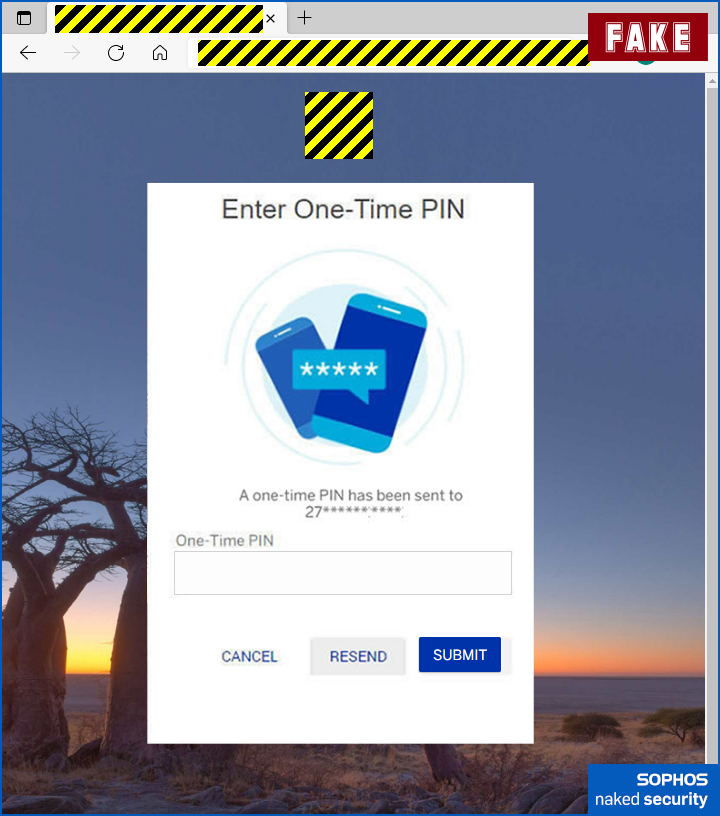 If the crooks get this far, and you do enter your 2FA code, then they almost certainly have enough to get into your account.

If all else fails, or it you’re suspicious of handling the matter online, as we hope you would be, there’s a fallback South African phone number listed in the “invoice” that you can call for help.

It’s not the bank’s real call centre, of course – in fact, it’s a VoIP (internet telephony) connection, so you could end up anywhere in the world.

We didn’t try calling it, but we don’t doubt that if you were to do so, the phone would be answered by someone claiming to be from the very bank against which this scam is being worked.

We’re guessing that a polite and helpful person at the other end would simply explain to you how to connect to the fraudulent site by typing in the URL yourself, and patiently wait with you as you went through the process, probably logging into the bank with your credentials in parallel, copying the password and 2FA code as soon as you’d typed them in yourself.